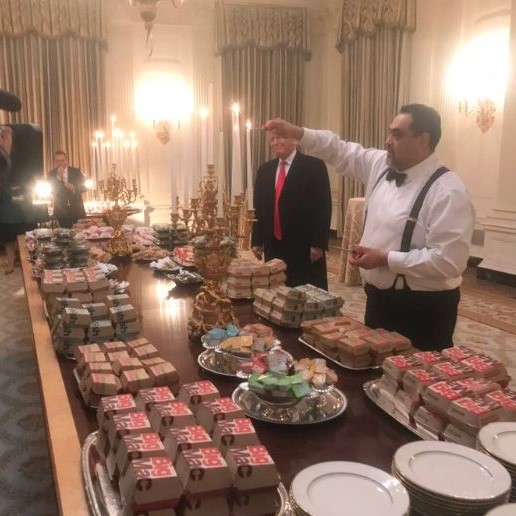 Donald said, “I had a choice. Do we have no food for you, because we have a shutdown? Or do we give you some little quick salads that the first lady will make, along with, along with the second lady. They’ll make some salads. And I said, ‘You guys aren’t into salads.'”

This is a false dilemma since there are many more options than just burgers or salads, at least if one thinks beyond fast-food spots, which usually, it’s true, serve only burgers and salads.

Donald could have ordered in a buffet of hearty, delicious Indian food. He could have served Thai food, with an assortment of green and red curries. The team would have enjoyed Chipotle’s pepper-and-onion mix and guacamole; even the reporter below noted Chipotle’s absence.

Trump shows off the fast food spread the White House brought out for the Clemson players.

There was Burger King, McDonalds, Wendy’s and Dominos. No sign of Chik-Fil-A, Krispy Kreme or Chipotle. pic.twitter.com/ZKibdeKVkt

After eating burgers, I’m sure the party died down a bit as the players had to devote energy to digestion. Even big, strong linebackers cannot swiftly tackle the digestive challenge of meat, cheese, and bread. Had the players eaten Thai or Indian food, specifically the vegan options, everyone could maintain their energy and wit, without needing a stimulating caffeine beverage.

I’m worried about more than the football players, though, who had to eat unhealthy burgers, something Tom Brady avoids. I’m also worried about Donald, who may eat far too much animal muscle and not enough fruits and vegetables.

The greatest obstacle to a second term may be fast food, not another candidate. Donald can’t run if his arteries are clogging up and reducing his energy. He needs to worry about burgers, not blue states.

The false dilemma of a marinated, grilled steak versus bland, steamed broccoli deters people from a vegan diet. The steak is seasoned, while the broccoli has no flavor or sugar. A fairer fight would be pitting a steak against Indian or Thai curry dishes, popping with seasoning, or with a bowl of ripe cantaloupe, providing natural sugar to the brain, which runs on glucose.

The buffet did fortunately have salads, seemingly ignored by reporters in their articles. Salads of green leaves provide a crucial raw and refreshing element for a plate of cooked food. In the movie Food Matters (see trailer), one man recommends that half of every meal be raw (uncooked). My buffet would also have one or more mixed fruit salads.

Donald’s comment also implies that big and strong football players wouldn’t want salads. This is actually true, since leafy-green salads have few calories, but this does not mean they would not some salad or huge portions of (vegan) Indian and Thai entrees. The largest and strongest land animals are herbivores and frugivores (animals that eat primarily fruit). I believe Tom Brady credits his physical resilience partly due to a mostly plant-based diet.

The White House team will serve more buffets. Hopefully, even after the partial shutdown, when more options are available, they will offer healthy, vegan options that provide a pleasant meal to guests, staff, and the president.