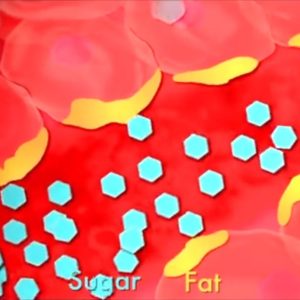 When I encourage people to eat fruit, some are worried about the sugar. Turns out that animal fat causes diabetes, not sugar, according to physician Neil Barnard, of the Physicians Committee for Responsible Medicine, as quoted in the documentary, What the Health.

The key point, which I initially missed, is that fat causes or starts diabetes, then the body can no longer tolerate sugar. Animal fat builds up in cells and prevents them from absorbing sugar, which then builds up in the blood, which is diabetes.

Sugar seems like the culprit since it drives up blood sugar levels, but it’s the (animal) fat the obstructed the body’s ability to process the sugar.

Here’s the transcript of what Neil Barnard says in the movie:

Interviewer: “What role does sugar play in causing diabetes?”
Neil Barnard: “Diabetes is not and never was caused by eating a high carbohydrate diet. And it’s not caused by eating sugar.
The cause of diabetes is a diet that builds up the amount of fat into the blood. I’m talking about a typical meat-based, animal-based diet.
You can look into the muscle cells of the human body and you find they’re building up tiny particles of fat which is causing insulin resistance. What that means is the sugar that is naturally from the foods that you’re eating can’t get into the cells where it belongs. It builds up in the blood and that’s diabetes.”

Here are images from the documentary. The first image shows fat (yellow) sticking to the outside of cells thereby preventing sugar (blue) from entering the cells. The sugar remains in the blood causing problems throughout the body.

Here’s the trailer for What the Health and the website.

WHAT THE HEALTH from AUM Films & Media on Vimeo.